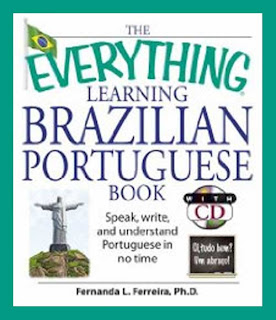 In a previous post about Peace Corps Training, I explained how difficult it was for me to learn Portuguese. I had no confidence in my ability to learn the language. I was in the lowest level of language class all through training. I had convinced myself I might never learn to speak Brazilian Portuguese.

* * * * *
LANGUAGE DEFICIT DISORDER
I arrived at my PC site, Glória, barely able to speak Portuguese and not understanding more than a few words. Brunie, the Volunteer who had requested a teacher for her site, was from a Latino-American family. She spoke Spanish and English at home. She had studied Portuguese in college. Portuguese and Spanish are not the same, but there are many similarities, so Brunie spoke Portuguese extremely well when she arrived in Glória and made a concerted effort to improve her language skills. At first, she kept a notebook with new words and made arrangements to sit in on Portuguese language arts classes at the ginásio. She loved learning the local slang. Brunie was determined to earn a 5 on the foreign service language evaluation required at the end of service. A 5 would mean she spoke like a native.
I, on the other hand, earned B’s and C’s in my Latin and French classes in high school and college. I could barely pronounce the foreign words and certainly understood none when spoken, but I could read and translate enough to pass my courses.


BRUNIE’S RULES
I moved into Brunie’s house with her. Immediately she set some rules.
Rule #1: Speak English only if we were alone. If anyone was within earshot, we used nicknames for people. The wall of our house was also the wall of our neighbor. If we had said, in English, “Dona Maria and her husband are marvelous people.” The neighbor might hear Dona Maria and marvelous, but marvelous sounds just tiny bit like malévoios, which means malevolent. Then the neighbor might start the rumor that we said nasty things about Dona Maria, or simply that we were discussing her in our house. So, in the house, we referred to people as the postmistress, the bank manager, the school director, the priest, the seamstress, the bar owner.
Rule #2: Always speak Portuguese when with Brazilians. If I didn’t know how to say something, I could ask Brunie, in Portuguese, “How do you say...?” inserting one English word. But if I spoke in English, Brunie would not acknowledge that I had even spoken. She thought it was rude to speak English around the Brazilians (and she was right about that.) And also things we said in English might be misinterpreted as in Rule #1.
Rule #3: Don’t say you understand when you don’t. Brazilians often asked, “Do you understand?” We are all programmed to prevent others from thinking we are stupid, so we often say yes, when we don’t understand at all.
Rule #4: Continue to learn. Keep a notebook with new words and attend Portuguese classes at the high school. Ask how to say something. Ask someone to explain what a Portuguese word means using different words. Request that people speak more slowly (one of the first phrases I mastered immediately in Portuguese.)
Rule #5: Get to work. The first night I was in Glória, Brunie took me to the literacy class she taught at night in the elementary school building. She assigned me to delightful cousins Maria and Maria, both around 15 or 16. One Maria was quiet and shy; the other was talkative and laughed a lot. On my first night, we practiced writing their names, writing letters of the alphabet and learning three-letter words. I’m sure they had about as hard a time understanding me as I did them. But I added a few words to my vocabulary, because each word in the literacy text book was accompanied by an illustration. Beside the word ave was a sketch of a bird. 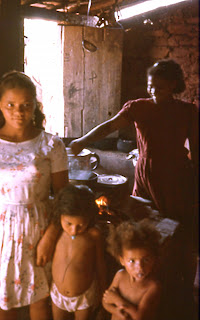 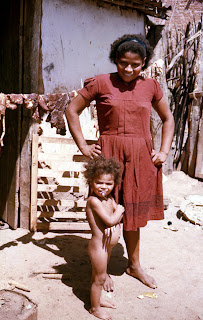 Shy Maria is on the far left. Outgoing Maria is in the red dress in both photos.

On the left outgoing Maria is stirring a pot of feijão, black beans.

On the right you can see, hanging behind her, carne do sol, salted sun-dried meat. This was a way of preserving meat without refrigeration.

LEARN BY TEACHING
That first night at the literacy class, I learned something valuable I had never understood before: a good way to learn is to teach. And by teaching, I continued to learn.
Within a few days, I was teaching English at the ginásio. The high school had been in existence only 3 years, so there were students who were just out of elementary school and there were adults who had never before had the opportunity to attend high school. My oldest student was 44. One of the students I admired was José Augusto. He was a 26-year-old tailor who supported himself and his mother. We often saw him at night through his window at his sewing machine (powered by foot pedal) with a book propped in front of him, sewing and studying by a kerosene lantern.
My students were not afraid to tell me when I made mistakes in Portuguese. And when I taught them English vocabulary, the Portuguese meaning was right there on the page, so I was learning Portuguese as I taught the students English. The text books were obviously British because the English words for truck and bus were lorry and omnibus.
By teaching English as a foreign language, I learned some things about English, that perhaps I knew, but didn’t understand. For example, when I taught the word ‘many’ from the text book, I also told my students they could also use the work ‘much’. When a student asked how to know which word to use, I couldn’t explain it. Obviously, I knew which word to use, but I didn’t consciously know why. I went home that evening and made a list of words with which I would use each ---and then it hit me, ‘many’ is plural while ‘much’ is singular. I would say ‘many cows’ but ‘much milk.”
After a few weeks, I was learning Portuguese by teaching and having to use the language. But I still struggled.

GAINING CONFIDENCE
About two months after my arrival, Brunie received a letter from a judge’s family in Aracajú inviting us to spend the weekend with them. Besides the luxury of being able to take a civilized shower and sleep on a real mattress, one thing happened that weekend that was a turning point in my understanding of Portuguese. The girls of the family, who spent time with us that weekend, told me I spoke Portuguese very well for only having been in Brazil for a few months. I was shocked. Me? Speaking bem português?
At first I didn’t understand why they thought I spoke well when many people in Glória couldn’t understand most of what I said. I think one of the reasons was that these girls were well-educated. Living in the capital city, they probably had more experience with foreigners than the people of Glória. So if I used the wrong tense of a verb or mispronounced a word, they were able to make the connection between what I actually said and what I was trying to say.
Somehow, the vote of confidence from those girls made me think, for the first time, that I might just be able to learn Portuguese ---and from then on it became easier and easier.
Soon I noticed the people in Glória were having an easier time understanding me, too.

FOUND IN TRANSLATION
A few other things made the language easier. Most of the everyday words in Portuguese were much different than English words: chair = cadeira, beer = cerveja, to eat = comer. But once I got beyond those words, many words were similar to English. Sometimes I had to adjust the pronunciation, or add a different ending, but even when I didn’t know a word existed in Portuguese, I often created a word from an English word and was rewarded with total understanding of what I had said. Sometimes, of course, I was understood, but also corrected, because I hadn’t gotten it quite right. At least I was communicating.
Other words reminded me of English words of similar meaning: green = verde (as in verdant), red = vermelho (as in vermillion), traveler = viajante (as in voyager), alone = sô (as in solo)
And even though I knew only a few Spanish words (mostly from western movies) some Portuguese words were the same or similar: house = casa, gentleman = cavalheiro (caballero in Spanish).

CONJUGATING VERBS
For me, the worst thing to learn in Portuguese were verbs. There are three different verb endings and each is conjugated differently. And then, like in English, there are a zillion irregular verbs. I decided I couldn’t get fancy with all the different conjugated endings, so I learned the present tense (I eat or I am eating) and the past tense (I ate). Instead of learning the future tense (I will eat), I learned to say the present tense of go (I am going) and added the gerund (to eat) after it (I am going to eat.)
I didn’t even attempt to learn imperative, past perfect, and all those other annoying tenses that roll off my tongue so naturally in English.

THINKING IN PORTUGUESE
Finally, after eight months or so, one day I realized I was no longer translating everything between Portuguese and English. I was thinking in Portuguese. It had come about gradually, and finally sneaked up on me so slowly, that I didn’t realize it was happening. When I began to think in Portuguese, I knew I had crossed a big hurdle. There was only one more to jump.
Soon after, I began to dream in Portuguese. Then I knew I was totally absorbed in the language.

PASSING THE TEST
Before leaving Brazil, each PC Volunteer had to take a foreign service language evaluation. The scores ranged from 0 to 5, zero being not able to speak the language at all. A score of 5 was reserved for someone who spoke like an educated native. Miracle of miracles, I earned a 3+. That meant I could speak Portuguese well enough to get along by myself in all normal situations and that I knew some vocabulary in a specialized field.

DREAM WORLD - 40 YEARS LATER
In a few months (July 2009) it will be 40 years since I returned from Brazil. I have had the opportunity to use Portuguese occasionally, but I have forgotten a lot. Now, I can understand more than I can speak. Maybe I cannot recall the word for onion, but if someone says ‘cebola’ I remember what it means. But there are words I have completely forgotten. I have forgotten how to use some tenses of some verbs. And, I have to again ask people to speak slowly. I resort to hand gestures and describing something if I can’t remember the exact word. And I’m sure my pronunciation has suffered.
All the Portuguese I once knew is still in my subconscious mind somewhere. How do I know? Because, occasionally, I still dream in Portuguese. In my dreams, I understand absolutely everything a Brazilian says to me and I speak the language fluently.

THANKS, BRUNIE
For someone who barely made it out of Peace Corps Training because of my poor language skills, I am still proud that I was eventually able to overcome my language difficulties. I owe most of that to Brunie. She was a hard taskmaster, but that is exactly what I needed.