When I left Brazil in 1969, I wrote to people there for a while, but (at least at that time) Brazilians weren’t great letter writers and many people took months to respond or didn’t respond at all. Or, perhaps our letters were lost in the mail. Eventually my teaching job, graduate school, art work, volunteer work, a new love who turned into my first husband, and my hectic lifestyle all took over and I lost touch completely with the wonderful people I had worked with in Glória.
After I had internet service at home, 15 years ago or so, I occasionally searched for the town of Glória, with no luck. I knew it might take a while for information technology to catch up in the sertão.
About 5 years ago, I finally found a web site called Sou de Glória (I’m from Glória). There were many virtual postcards on the site, including one showing the cell tower that served the town. I knew then, that Glória was no longer the underdeveloped town in the middle of the hinterland. Other photos showed a town so much larger than it was in 1969. The only thing I recognized was the church. I posted a notice on that web site stating that I would like to contact old friends from Glória, but all I received were spam messages from Brazilian businesses.
In late 2008, I found a notice about a poet and professor from Glória, Jorge Henrique, who was going to present his epic poem on the anniversary of the founding of Glória. It included an email address. I sent him a message asking if he knew some of the people I wished to contact, and if so, requested he give them my email address.
Although I heard back from him and saw that he was following my blog, I didn’t hear from anyone else.

Last week, everything changed:
On May 17th, Jorge Henrique ----obrigada, obrigada (thank you, thank you) ---wrote a short article about my blog and posted it on the official web site of N.S. da Glória and also on the web site of the colégio there.
) 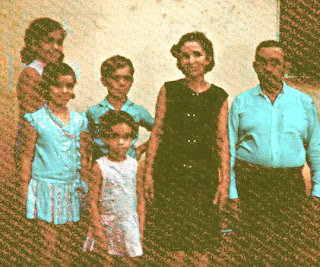 Dona Guiomar and her family.
I heard from Celia, top left and
Alcione, in front. (See disclaimer
at bottom about poor photo quality.)
Within a few days, I heard from Alcione the youngest daughter of Dona Guiomar ---a great and progressive woman who was the elementary school director when I left Glória in 1969. Alcione, was six when I left Brazil. She sent me news of her mother, older sisters and brother. Also Alcione planned to be in Glória on the weekend of May 22nd and intended to see who she could find that I knew back when. A few days later I heard from her eldest sister Celia who was about 13 when I left Brazil. She told me her father had died c. 1974. Her mother is now 81 and is doing well. 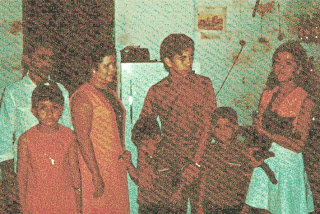 Idalécinho (middle) at about age 16

with his parents, sisters, brothers,
and cat.
Also, I received an email from Idalécio, who I knew as Idalécinho, one of my former students. After I replied to him, he kindly wrote back with more news of residents of Glória.
I actually cried reading his email. First, sadly, some of the people I knew had died, including his parents, a friend who had worked at the bank and taught at the ginásio, and Dona Nininha who had treated Brunie and me like daughters. A few days later, I heard from Nadja, one of Dona Nininha's daughters.
I also cried from joy to hear wonderful news of my former students.

(©2009, C.J. Peiffer)
Read the rest of this story in
Alegria! Alegria! Part 2
Please excuse my very bad photography.
The photo of Dona Guiomar and Idalecinho
and their families are so bad that I was almost
embarrassed to show them. Below you can see the
photos as I scanned them from 40-year-old slides.
In comparison, the ones I enhanced above aren't so awful. 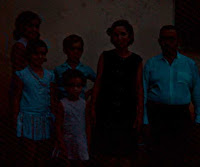