THE TOUGHEST JOB YOU'LL EVER LOVE 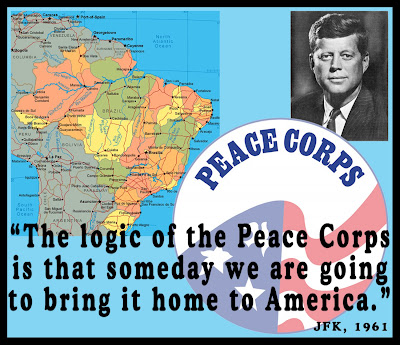 Originally, this was written in October of 1986,
thus many references are to that time.
Much of this is still relevant today.
[In October 1986, I wrote:]
Nineteen years ago, on an August evening in 1967 when I was 22 years old and fresh out of college, full of hopes and ideals and ready to save the world, I arrived in the tiny town of Nossa Senhora da Glória where I spent the next two years as a Peace Corps Volunteer, teaching English and working on community development projects in Brazil's underdeveloped Northeast.
I didn't save the world, of course. Although some of my optimistic hopes and ideals were soon dashed, many were also fulfilled.  After almost twenty years, I look upon that time as one of the best times of my life and one of the experiences of which I am most proud.
In those two short years, I probably learned more than ever before or since in a 24 month period. I learned about the customs and habits of another culture. I learned to communicate in the Portuguese language. I learned to live reasonably well without running water, electricity, and other conveniences. But what I really learned is a little less tangible.

I learned I could do many things I thought I would never be able to do ---like learn another language well enough to get along in most situations. I learned to live without things I thought I couldn't live without, such as TV and telephones. This gave a boost to my self-confidence.
I learned to look at the United States from a global point of view during the Vietnam years. I didn't like the warmonger, imperialistic image I saw. I thought it was a shame that, as a nation, we were not respected nearly as much as we were feared.
I learned that we are truly one world, and that we are going to have to start thinking and acting as if we believed it. One of the Peace Corps' mottos is  to "bring the world back home." One contribution Returned PC Volunteers have made to our society is to return with a wealth of experience and knowledge of another culture to share with family, friends, students, and coworkers.
Most of all, I learned how lucky I am to be an American. I am not complacent. There are many things that need to be improved here, but living in a town of 2000 where perhaps 20% of the people were functionally literate, where the infant mortality rate was about 30%, made me appreciate, more than ever, the wonderful opportunities I have as an American, at the same time celebrating the similarities and differences of other cultures.

In September 1986, I attended the Peace Corps 25th Anniversary Conference in Washington, DC.  I learned a sobering fact there. The Peace Corps has less funding per year than our military bands. The Peace Corps has always had to beg for its meager funds.
In 1961, Kennedy had so much faith in the idea for a Peace Corps, that he used his discretionary funds to train and place Volunteers in 8 countries before Congress approved PC funding. For months it operated from a hotel room, with mostly volunteer workers, people who hunted down the office and dropped in to give time to the project.
At the conference, I learned that everything and anything could bring me to tears.
I cried when Cory Aquino [the new president of The Philippines] received a standing ovation upon her entrance. I cried when Bob Shriver told us how proud his father [Sargent Shriver, first PC director] was that his younger son had joined the Peace Corps, the first Shriver to do so.
When the first PC Volunteer told how he received a letter saying he had been accepted to serve in "China or some other African country," I cried with laughter. He was assigned to Korea.
Awards were given to Volunteers who had returned home only to do amazing things, like start a program to prevent blindness in a Caribbean nation. Tears rolled down my cheeks as I listened to the award winners' stories. 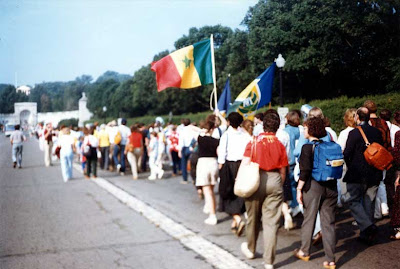 I was thrilled at the sight of 7000 Returned Peace Corps Volunteers marching from the Lincoln Memorial to Arlington Cemetery, each group carrying the colorful flag of the country served. We passed JFK's gravesite on the way.
I cried at Bill Moyers' speech at the memorial service held in Arlington's amphitheater,  honoring Volunteers who had died during service and when Sargent Shriver and Loret Miller Ruppe [the PC director in 1986] handed yellow roses to family members of the deceased. [Fewer PC Volunteers died during service than those in the same demographic group at home. Most were victims of accidents.]
Although not many from my own PC group attended, many others who had served in Brazil were there. Brunie, the girl with whom I shared my PC site [our service times overlapped for a year] flew from California, along with her fiancé and adopted daughter. It was wonderful to see her and to catch up with an old friend.
It was a happy, joyous, nostalgic, emotionally-draining weekend. I didn't want it to end.

In many countries of the world today, people acquire their impressions of America and Americans from TV or movies. It's frightening to think that Rambo movies and Dallas or Dukes of Hazard reruns form opinions of us. [Remember, it was 1986 when I first wrote this.]
In many remote villages, the only real American anyone ever meets or has been close to or worked with, has been a PC Volunteer, someone who looks strange to the locals, who may dress differently, may not speak the language particularly well, but someone who cares about them and their lives, someone who will work hard and love it ---as they say, it's "the toughest job you'll ever love."
PC Volunteers live in remote regions of the world, not needing protection. Few have had to be recalled because of internal problems in host nations. Local people love the Volunteers for what they do. When I left Peace Corps service in 1969, a few Brazilians, frank to a fault, told me they still disliked the United States, but they loved me. This was progress ---some had told me two years earlier that they despised America.
It wasn't easy. There were times I would have gone home in a snap, like the time we found a poisonous snake in the house --- but there wasn't a bus passing through Glória for four days, so I stayed.
We had to cook everything from scratch (that meant starting with a live chicken), boil and filter water, sleep on a straw mattress under a leaky roof, teach with fewer materials for an entire class than a single American student would have. At times, I suffered depression, culture shock, alternating bouts of diarrhea and constipation. I lost nearly 30 pounds and suffered with intestinal worms that required a handful of horse-sized pills to cure.
Yet there were wonderful moments. I taught English as a foreign language and helped with community-development projects. I made visual aids for the elementary school and for the doctor who showed up once a week, because sometimes he had only one text book for an entire class at his medical school. I was able to travel throughout Brazil and visit other South American countries. There were lazy days at the beach, exuberant Carnaval celebrations, soothing rhythms of samba and bossa nova, and wonderful new Brazilian friends. There were also many humorous moments, such as on my first day in Rio when I ordered two fried grapes for breakfast.
I loved Brazilians and Brazil. It was truly a land of contrasts. At times, I found Brazil backward, yet rapidly progressing, sexist yet wonderfully romantic, fascinatingly exciting while amazingly slow paced. Each day was full of joy, humor, and tragedy. The land surrounding the town where I lived was drab and colorless. The cities, the language, the music, and the people were vibrantly colorful, sometimes exotic.

In its heyday, the Peace Corps had more than 15,000 Volunteers serving around the world. Today [1986] only about 5500 are in the field. In the 1980's, with an ever-increasing military budget, star wars, and terrorism, we need a Peace Corps more than ever.
Current Volunteers and Returned PC Volunteers have become citizens, not only of the United States, but also of the world.