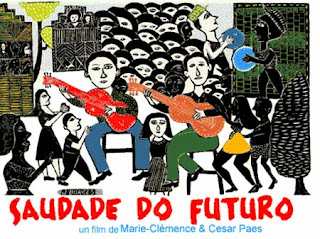 "Saudade" is a Brazilian Portuguese word difficult to translate into English. It is a longing, missing or nostalgia, often bittersweet. "Saudade do Futuro" roughly means "Longing for the Future."
This 2000 documentary film centers on the lives of nordestinos (people from the northeast of Brazil) who have migrated to São Paulo, a city of 16 million, looking for a better future. Most nordestinos are thought of as unwelcome hillbillies who ought to stay in the Northeast growing potatoes in the drought-prone sertão (hinterland). Some are successful in São Paulo, including Dona Erundina who became mayor (1989-1992) and Emanoel Araujo, an internationally-known sculptor who is a respected member of São Paulo's art scene. Many end up as street vendors, laborers, or the musicians who are the heart and soul of this film.

Clearly related to rap, the musical style called "repente" that evolved from African rhythms, is featured in this film.
Repentistas tap out music on tambourines, guitars, flutes, or drums while improvising verses, often saudades for the simpler life in the Northeast, the hardships of the big city, or humorous (& often sexually suggestive) insults hurled at each other or audience members who gather to listen and donate money. One family group, Banda da Pifanos, started in 1924. The oldest members of the multigenerational ensemble recall being forced to play for Lampião, a notorious bandit who roamed the Northeast with 50 to 100 followers in the 1920’s and 30’s.
Interspersed between the music are everyday nordestinos who work long hours at mundane jobs for little pay in São Paulo. Their lives are enriched by their social events, dancing, and the repente music which is both humorous and a celebration of their lives.

I lived in the Northeast of Brazil in the late 60's. I saw, in the varied nordestinos of this film, the faces I had lived with every day during my time there. The faces are filled with the combination of despair, optimism, and humor that creates the wonderful improvised music that infests the film with rhythmic beats that are uniquely Brazilian. There is no narration. The characters tell their own stories through words or verses. The stunning photography of bustling São Paulo makes New York traffic look like a rural joy ride. The film may not be for everyone, but for those who would enjoy seeing a unique slice of Brazilian life, it is “maravilhoso!”

to this city we come
and end up in a slum
we build lovely villas
with door and windows
but once we've painted the place
they slam the door in our face
Update 2/04/09: This post was chosen as the Featured Post of the Week at WORTH A THOUSAND WORDS. Thanks, Contest Chris. Click on the link to join his Worth a Thousand Words Contest.