When I arrived at my Peace Corps site and discovered I would be living without electricity or running water, it seemed like my life there would be much like a two-year-long camping trip. I had been a Girl Scout. I was prepared ---or so I thought.
I admit that it was fun for a while, using my Girl Scout skills and learning new ones to get along in the harsh environment, but after a while, I missed many of the conveniences of home.
On one occasion, forgetting that things didn’t work in Glória the way they worked at home, could have turned into a disaster.
When I arrived, Brunie (who had already been in Glória for a year) took me to a carpentry shop to buy a hand-made wooden bed, an extra chair, and a wardrobe. We went to another shop for a mattress, which was a large cotton sack filled with straw. It was comfortable enough, although I needed to add more straw from time to time since the original straw would break into small pieces and settle after a while.
When we changed sheets, we sprinkled a powder on the mattress covers to kill bed bugs which were a common problem in that area. We always slept under mosquito nets to protect us, not only from mosquitos, but also from scorpions and the beetles that carried Chagas disease.
While one side wall of the house faced an open area, the other side wall was also the wall of our landlord’s home next door. And the opposite wall of his house was shared with another neighbor and so on down the street. There was a space between the horizontal top of each wall and the pointed roof, leaving a large triangular open area between homes. This made it easy to converse with the neighbors next door, but it also meant one could hear everything going on at the landlord's home. He and his wife were newlyweds, so you might imagine what I mean by "everything."
Our front door left an inch or two of open space between the bottom of it and the floor. This, plus the open area between houses, meant that unwanted varmints could enter the house, either from outside or from the neighbor’s homes. We had toads, mice, bats, roaches, tarantulas, and an occasional snake in the house.
I hadn’t taken much jewelry with me, but I had a dozen pair of earrings and several inexpensive rings and a watch which I kept in a box on the table I used as a night stand. One day, while making the bed, I knocked the box onto the floor. The various pieces scattered under the bed.
Because of the assorted vermin that could be lurking there, in no way was I was going to reach into the shadows below the mattress without seeing what was there first. So, I did what I would do at home. I grabbed a lamp, and put it under the bed. I started to pick up my jewelry before I realized that a kerosene lantern with an open flame under a mattress filled with straw was not the brightest idea I ever had.
Luckily Brunie was in the kitchen. I yelled for her to bring a pot of water from the huge ceramic storage container there. Meanwhile I started to beat the flames with a towel.
Within a few minutes, the fire was out. The sheets were burned in one large spot as was part of my mattress. Considering it was filled with dry straw, I was surprised it wasn't engulfed in flames within seconds. The wooden frame of the bed was blackened on a small area of the side, but more scorched than burned.
Fortunately the mosquito net had been flung aside before I started to make the bed. If It had caught fire, the flames would probably have leaped to the ceiling where the net was attached to a lattice of wood that held up the ceramic tile roof. Since the homes were attached, the fire might have spread from lattice to lattice, resulting in the roofs of all the houses on that side of the street caving in.
Glória had no fire department. And since there was no running water, residents would not even be able to hook up a hose to spray water on their ceilings. Any attempt to throw water as high as that from buckets would have been futile.
I am so glad I hadn't caused neighbors to lose their homes or belongings. Worse yet would have been if I had caused someone a serious injury.
I could imagine the headline: PEACE CORPS VOLUNTEER'S STUPIDITY LEAVES DOZENS OF BRAZILIANS HOMELESS.  But luckily that didn't happen. 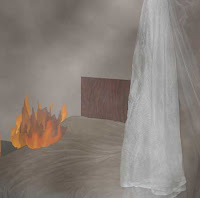 After cleaning up the charred mess and water in my bedroom, I had to buy new sheets and take my mattress to the shop to have the cover patched and re-stuffed with new straw. It retained a burnt odor for months.
I also bought a flashlight to keep beside my bed ---a prudent purchase.
(©2009, C.J. Peiffer)
Posted by Carolina at 6:27 AM